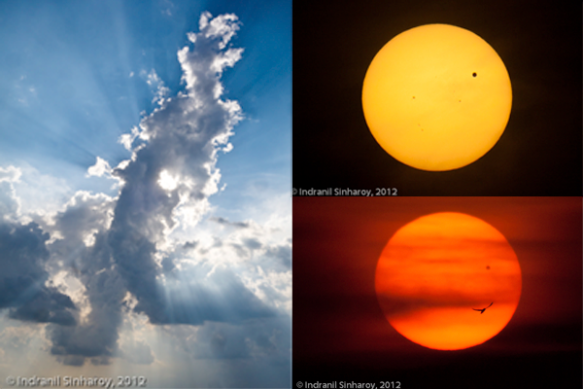 One in a life-time opportunity, Threatening clouds, 96 F heat, 958 photographs.

After all the anticipation and wait, the day finally arrived. It was a once-in-a-lifetime opportunity as the next transit of Venus will happen in the Christmas of 2117. The weather decided to play menace, with threatening clouds and high heat. However, we weren’t just going to cringe and we went to the planned location with a camera and solar filter anyway. With the clouds showing up every now and then, the temperature at 96 F, and after 958 photos it was a tough day, but in the end it was well worth the pain. Here are few of the memorable photographs from the rarest of the celestial event of our time.

Note: These photographs were taken with very simple equipment — a Canon EF70-300mm f/4.5-5.6 IS USM lens mounted on a Canon Rebel XT. Hence the resolution (fine spatial details) in these photographs are not very high. I had also attached a solar filter that I made from Baader AstroSolar film. Hope you will like the photographs.

Venus continues to move in

The Black drop effect at second contact. The clouds are also coming in. 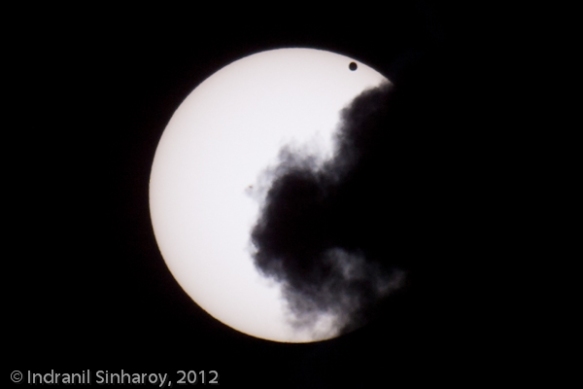 The cloud-free Venus and Sun show went on for a short while.

The ominous cloud cover the Sun. I would have loved the God rays on some other day, but today it was not feeling good.

Columns of clouds still hiding the Sun and Venus.

Dense clouds move away leaving a thin blanket which caused this diffused look.

The Sun (with Venus eclipsing a small portion) finally appeared from behind the clouds after the long and anxious wait. I just short about 10 to 15 frames and all of a sudden, the camera stopped “clicking.” To my (very unpleasant) surprise, I found out that (by this time) I had completely filled the 4GB Compact Flash memory. That was so damn painful as I never anticipated that I will run through 4GB of CF card in an fly. I wasn’t carrying any extra CF cards with me. I decided to delete a few of the photographs in the CF card to make space for about 10 shots so that I may record the moment when the Sun emerged after the hiatus. Subsequently, I had no other option, but to drive to my apartment to get more CF cards. By the time I came back (in 15 mins.), the Sun was already turned to a pale orange shade as it was getting closer to the horizon.

The clouds are still there, popping up in front of the Sun every now and then.

Nearing the end of the show. 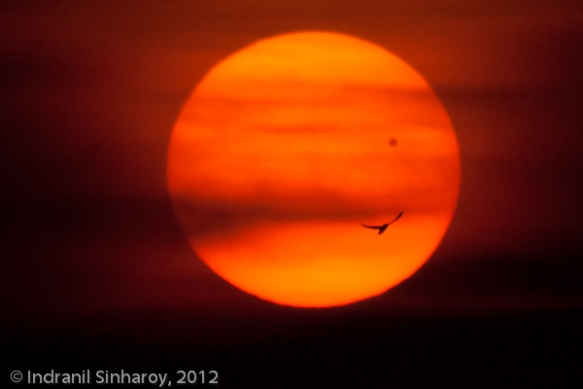 My best photo of the 958 photos that I took!

Composite photograph showing the different positions of Venus during the transit. Extended gaps in the path indicate periods of cloud cover.

I consider myself very lucky to have witnessed the transit of Venus 2012. This event, along with the Total Solar Eclipse of 2009 (longest of the century) and the Super Moon of 2011 will always be special for me. Here are some photographs of some of the rare events that I have been fortunate to witness in my life — Rare events gallery.