ZEMAX (also known as OpticStudio), a leading tool for design and analysis of optical systems, provides an in-built DDE server that enables access to ZEMAX’s features externally using any Windows application. The ability to access and control ZEMAX externally allows it to be used in many interesting and powerful ways, some of which has been documented in the “ZEMAX Extensions” chapter of the ZEMAX manual. An excellent toolbox called MZDDE, developed by Derek Griffith at CSIR, already exists for users of MATLAB. When I tried to look for an equivalent toolbox in Python, I couldn’t find one, so I decided to write one myself.

PyZDDE is a Python-based toolbox for communicating with ZEMAX using the DDE messaging protocol. It is similar to MZDDE and very much inspired by it. Currently PyZDDE is not as extensive as MZDDE as it is a work in progress. However, it has some distinguishing features — it can be used with regular Python scripts and also in an interactive environment such as an IPython shell, QtConsole or IPython notebook. The ability to interact with ZEMAX from an IPython notebook using PyZDDE can be a powerful tool for both teaching and documentation. Please visit the github repository for downloading and using the code. The github repository also contains an accompanying wiki page which describes briefly on how to use the PyZDDE toolbox.

The basic sequence of steps of accessing ZEMAX (the DDE server) from Python (the DDE client) are as follows:
The figure below illustrates the above process. 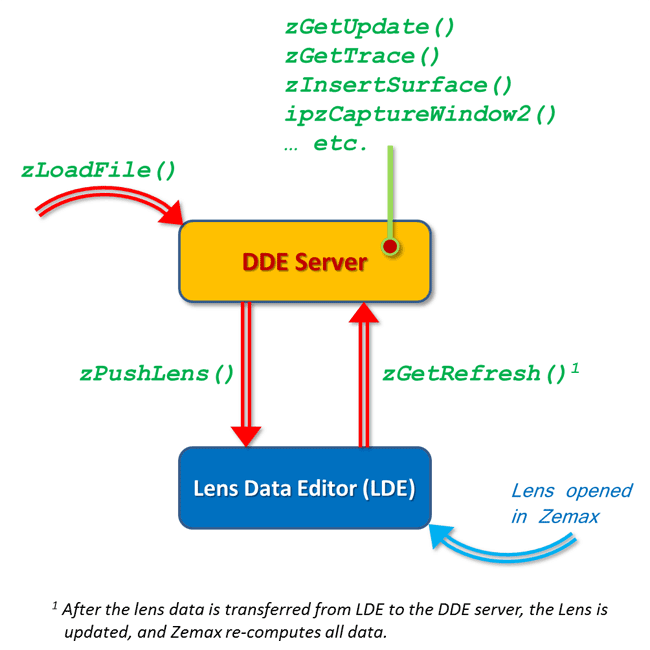 Currently, all the functions (126 in total) for accessing the ZEMAX using “data items” have been implemented. In addition, there are few utility functions. At this point in time, a distribution version is not available as the toolbox is being updated regularly. Please download the code folder to a local directory in your computer and add that directory to python search path in order to use it (please see the github wiki for details).
There are 4 types of functions in the toolbox:
All the functions prefixed with “z” or “ipz” (types 1, 2 and 3) interact with Zemax directly and hence require a Zemax session to running simultaneously.As they are instance methods of a pyzdde channel object, a pyzdde object needs to be created.

Helper functions of type 4 can be accessed the the `zdde` module directly.

Output of the above Python script.

I have also written a Zemax knowledge-base article called “Talking to ZEMAX from Python using PyZDDE”. That article gives a more complete overview of the toolbox. The link to the knowledge-base article is http://www.zemax.com/support/knowledgebase/talking-to-zemax-from-python-using-pyzdde [updated on 02.24.2015]

PyZDDE is now feature complete with array ray tracing feature added to it.