The Ambiguity Function (AF) is an useful tool for optical system analysis. This post is a basic introduction to AF, and how it can be useful for analyzing incoherent optical systems. We will see that the AF simultaneously contains all the OTFs associated with an rectangularly separable incoherent optical system with varying degree of defocus [2-4]. Thus by inspecting the AF of an optical system, one can easily predict the performance of the system in the presence of defocus. It has been used in the design of extended-depth-of-field cubic phase mask system.

To understand the basic theory, we shall consider a one-dimensional pupil function, which is defined as:

The *generalized pupil function* associated with

is the complex function

given by the expression [1]:

is the aberration function. Then, the amplitude PSF of an aberrated optical system is the Fraunhofer diffraction pattern (Fourier transform with the frequency variable

) of the generalized pupil function, and the intensity PSF is the squared magnitude of the amplitude PSF [1]. Note that

is the distance between the diffraction pattern/screen and the aperture/pupil.

For the purpose of analyzing optical systems using the ambiguity function, it is convenient to separate the defocus term (

The (one dimensional) optical transfer function (OTF) is defined as the normalized autocorrelation of the ATF:

The simplified equation is written as follows:

The ambiguity function, which is used for radar analysis, is defined as the Fourier transform of the product

Comparing the simplified expression of the aberrated OTF,

, and the ambiguity function,

This implies that the ambiguity function

associated with a base function

(which has a slope

, and passes through the origin in the

plane as shown in the following figure.

1. The “base function” itself does not contain the defocus term, although it may contain other aberrations (see equation (3)).

2. Equation (6) is the “normalized autocorrelation” of the generalized pupil function, which implies that the maximum value of the function is 1. In equation (7) there is no explicit normalization and so the maximum value can be greater or less than 1. We must be mindful of this when comparing the AF to the OTF and prefer to chose appropriate amplitude for the base function

In fact, the whole 2-D AF contains the OTFs

for various values of defocusing

arranged in a polar fashion. Of special interest is the in-focus OTF for which

and hence corresponds to the line along the “

If the only aberration is that of defocus,

in the expression for the generalized pupil function. Therefore the base-function which we consider is

First, we will consider the evaluation of the following integral of the general form:

The following figure, which shows the regions of overlap between

), is useful to understand the finite limites of the integral. 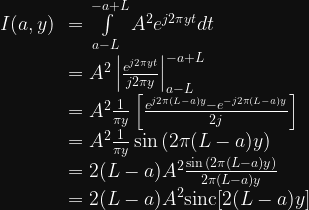 function used above is the normalized

that is defined as 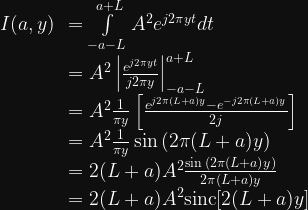 Note that we really didn’t have to break the integral into two parts. Instead we could just evaluate the integral between the limits

We can combine the two cases and write the equation more compactly as:

In our example, for which the base function is

(so that the maximum value is 1) and

Now, from equation (8) we have

. Therefore we can write the expression for the OTF directly from the AF.

In [2], the authors have used the *un-normalized*

function that is defined as

function in their paper. We use the normalized definition

The figure below (after the code block) shows the function

. It can be seen in figure that roots of the (normalized)

. Therefore the zero value loci for the AF associated with the one-dimensional rectangular pupil are found by equating

. In each figure, the plot on the left shows the ambiguity function and several lines corresponding to different defocus error

are denoted by the gray dashed lines. The intersection of zero value locai with the line(s)

, which in the OTF plot represents the frequencies where the OTF is zero, is shown by the cross (‘x’) markers. The plots on the right show the corresponding variation of the OTF with different.

Plots of AF and OTF for which

. The equation for the OTF was obtained directly from the ambiguity function by replacing

The points of intersection between lines

and each zero loci curve

) can be found by equating

For example, the line

, and so on. As we can see, there are odd number of intersections of the lines with the zero loci curves when the defocus error

is an integer multiple of

. This corresponds to an odd number of zero-value OTF points in the OTF plots when the defocus error

is an integer multiple of

Note that we only found the abscissa (

coordinates) for the intersection points above.

Plots of AF and OTF for which

(the particular values were arbitrarily chosen, and the

Also, note from the above plots that the first occurrence of the OTF intersecting/crossing the zero value happens as

. This point is also the known as the traditional or Hopkins criterion for misfocus [4].

Cubic phase masks (CPM) has been used to make hybrid optical systems largely invariant to defocus, thus extending the depth of field of such systems. For details on CPM systems, refer to [4].

The expression for the ambiguity function of a cubic phase mask is given below [4]:

We will numerically evaluation the above expression for the AF of cubic phase mask (CPM), recognizing that the expression is of the form of inverse Fourier Transform of

Here are the steps for rendering the 2-D AF for CPM:

The expression for the OTF for the CPM is then given by:

We will use numerical integration to generate the plots of OTFs for the CPM with various amounts of defocus.

We can see from the above plots of the OTF, that the OTFs are insensitive to large amounts of defoucs. More importantly, there are no regions of zero values within the passband (though the bandwidth is not really constant for large amounts of defocus). This property is extremely important from the point of view of the reconstruction filter (such as an inverse filter or an Wiener filter).