As part of my PhD research, I am working on  extending the depth-of-field of iris recognition cameras. In a series of blog posts (in the near future) I would like to share some of the things that I have learnt during the project. This post, the first one in the series, is an introduction to iris recognition biometric technology. I believe the material presented here could benefit someone new to iris recognition get a quick yet comprehensive overview of the field. In the following paragraphs, I have described the iris anatomy, and what makes it so special as a biometric technology, followed by the general basis of iris based verification, and the four major constituents of a general iris recognition system.

The human iris is the colored portion of the eye having a diameter which ranges between 10 mm and 13 mm [1,2]. The iris is perhaps the most complex tissue structure in the human body that is visible externally. The iris pattern has most of the desirable properties of an ideal biomarker, such as uniqueness, stability over time, and relatively easy accessibility. Being an internal organ, it is also protected from damage due to injuries and/or intentional fudging [3]. The presence or absence of specific features in the iris is largely determined by heredity (based on genetics); however the spatial distribution of the cells that form a particular iris pattern during embryonic development is highly chaotic. This pseudo-random morphogenesis, which is determined by epigenetic factors, results in unique patterns of the irises in all individuals including that of identical twins [2,4,5]. Even the iris patterns of the two eyes from the same individual are largely different. The diverse microstructures in the iris that manifest at multiple spatial scales [6] are shown in Figure 1. These textures, unique to each eye, provide distinctive biometric traits that are encoded by an iris recognition system into distinctive templates for the purpose of identity authentication. It is important to note that the color of the iris is not used as a biomarker since it is determined by genetics, which is not sufficiently discriminative. 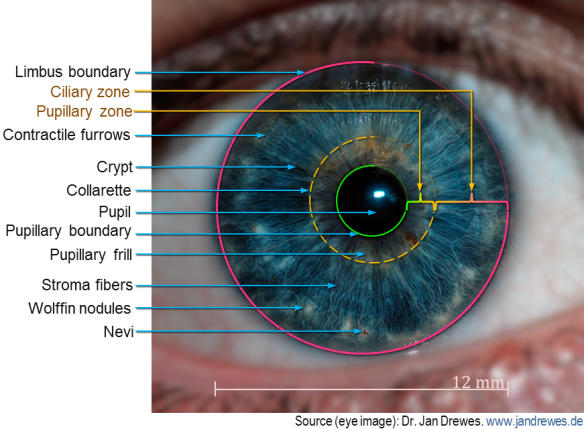 The problem of iris recognition is analogous to binary classification. It involves grouping the members of a set of objects into two classes based on a suitable measure of similarity (Figure 2 (a)). Similar objects cluster together as they exhibit less variability within the same class. In the figure below, the intra-class variability (randomness within class) and the inter-class variability (randomness between classes) are plotted as a function of an appropriate similarity measure, D. The degree of variability is proportional to the uncertainty of D. For example, in face recognition, the intra-class variability would be the uncertainty of identifying a person’s face imaged under varying lighting conditions, poses, time of acquisition, etc.; on the other hand, the inter-class variability is the variability between the faces of different subjects. Naturally, the degree of similarity is higher (corresponds to lower uncertainty) in the former case. As shown in the figure, there are four possible outcomes for the binary classification problem based on the two possible choices in the decision. The region of overlap produces the two types of error rates. The False Accept (or False Positive) is the area of overlap to the left of the decision criterion, and the False Reject (False Negative) is the area of overlap to the right of the decision criterion. Objects can be reliably classified only if the intra-class variability is less than the inter-class variability [2], in which case, the two distributions are sufficiently separated in space, and the degree of overlap is minimum. Figure 2 (b) (adapted from  [5]) is a plot of the distributions of hamming distances (defined later) for 1208 pairwise comparisons of irises from the same eye, and 2064 pairwise comparisons of irises from different eyes. The figure shows that the two distributions are well separated indicating the robustness of using hamming distances for the iris recognition problem.

Generation of the iris code broadly consists of four basic steps. An additional matching step is required for the task of identification of a subject based on  the iris code [7,8]. A schematic of this pipeline is shown in Figure 3. 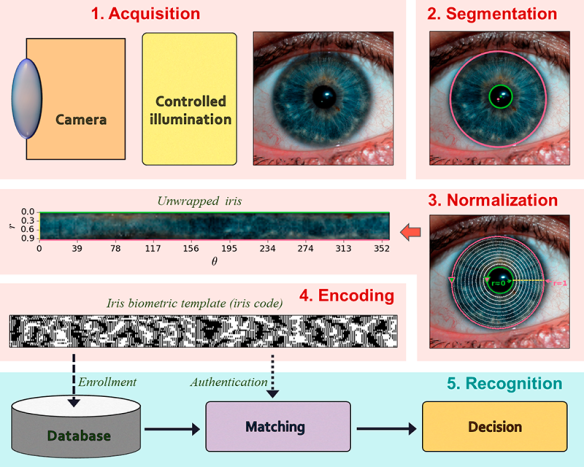 The steps are briefly described below:

The module following the capture of an acceptable quality iris image is largely known as the segmentation and localization. The goal of this step is to accurately determine the spatial extent of the iris, locate the pupillary and limbic boundaries and identify and mask-out regions within the iris that is affected by noise such as specular reflections, superimposed eyelashes, and other occlusions that may affect the quality of the template [7]. A wide gamut of algorithms have been proposed for the segmentation and localization of iris regions, such as Daugman’s integro-differential operator [2,5], circular Hough transforms along with Canny edge detection [3,6], binary thresholding and morphological transforms [11,12], bit-planes extraction coupled with binary thresholding [13,14], and active contours [15–17].

The spatial extent of the iris region varies greatly amidst image captures due to magnification, eye pose, and pupil dilation/expansion [5,7]. Furthermore, the inner and outer boundaries of the iris are not concentric, and they deviate considerably from perfect circles. Before the generation of biometric code the segmented iris is geometrically transformed into a scale and translation invariant space in which the radial distance between the iris boundaries along different directions are normalized between the values of 0 (pupil boundary) and 1 (limbic boundary) [2]. This unwrapping process, shown schematically in Figure 4, consists of two steps: First, a number of data points are selected along multiple radial curves interspaced between the two iris boundaries. Next, these points, which are in the Cartesian coordinates, are transformed into the doubly dimensionless polar coordinate system of two variables

. As a result, an iris imaged under varying conditions, when compared in the normalized space, will exhibit characteristic features at the same spatial locations. 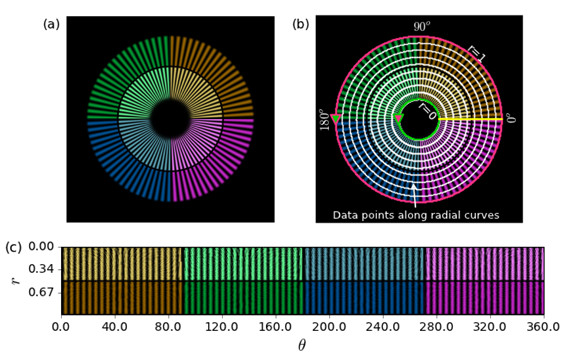 The recognition of iris for subject verification/authentication requires an additional matching step that involves measuring the similarity of a template generated from a newly acquired iris image to one or many templates stored in a database. The most common technique for comparing two iris codes is the normalized Hamming distance (HD) which is a measure of the percentage of locations in which two binary vectors vary [16]. For example, the HD between two orthogonal vectors is 1 whereas the HD between two identical vectors is 0. While an HD of 0 between two iris images from the same eye is highly improbable in practical scenarios pertaining to noise, an HD of 0.33 or less indicates a match [2].

A detailed explanation of the image processing and pattern recognition techniques employed in the field of iris recognition is beyond the scope of this post. Interested readers are referred to the work of Daugman’s [2,15] and the extensive survey of iris recognition by Bowyer et al  [10].

In the next post I will cover some of the desirable properties of iris  acquisition systems.

(The figures in the post were generated using a combination of Matplotlib, OpenCV (for segmentation, normalization and encoding of iris in Fig 3) and Powerpoint.)

10 thoughts on “Primer on iris recognition”